The political economy of sharing 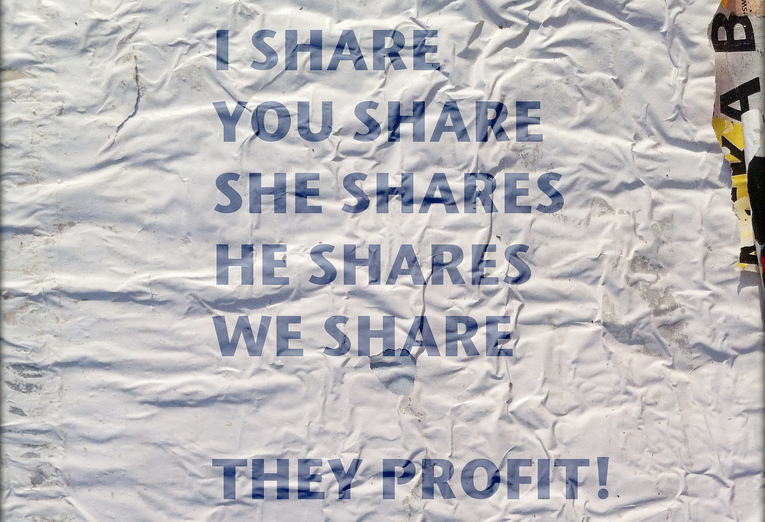 Contrary to the common misconception that people are individualistic and selfish by nature, anthropologists have shown that gifting and sharing has long formed the basis of community relationships in societies across the world.

A recent spate of scientific research has built on this evidence to demonstrate that as human beings we are naturally predisposed to cooperate and share in order to maximise our chances of survival and collective wellbeing. Without the act of sharing and reciprocity, there would be no social foundations upon which to build societies and economies.

In this light, it is not surprising that the principles of sharing and equality are important components of many of the world's religions, as well as many secular movements such as humanism. In broadly similar ways, Judaism, Islam, Christianity, Buddhism, Hinduism and numerous other faiths all expound the importance of sharing wealth and other resources fairly, as well as the need to protect the vulnerable and those who are less well off in society. For millennia, the principle of sharing has aligned closely with the moral values and ethics that should underpin the fabric of society.

Yet despite the prevalence of sharing throughout the natural world and in family life, we have largely failed to create a global community of nations in which sharing is embodied in our international economic and political structures. Rather than seeing the family of nations as a unit and accepting that the principle of sharing must play a key role in governing our collective use of available resources, the global economy has been built on the opposing and misguided objects of national self-interest, aggressive competition and materialistic acquisition.

After centuries of colonialism and the exploitation of weaker countries by the more powerful, a tremendous imbalance exists in living standards between the so-called developed and developing worlds, which is a crisis that lies at the heart of present-day world tensions. As the global economy increasingly hits natural resource limits and planetary thresholds, a very real threat to human survival is now posed by escalating conflicts over land, energy reserves and other key industrial inputs, notwithstanding the ecological consequences of overusing the Earth’s finite resources.

If our collective failure to share resources within and among nations is responsible for increasing inequalities and exacerbating many of the other crises we face, then it stands to reason that we need to find ways of reforming our political and economic systems by bringing them more in line with the principle of sharing. From such a common sense perspective, the term ‘economic sharing’ can be used to describe the application of this principle to how economies are organised and resources are distributed, which could include everything from land and energy to knowledge and technology. Furthermore, the concept of sharing applies to democratic forms of governance in terms of how equally power is distributed both nationally and globally, which has potentially dramatic implications for participatory politics and global democracy – not least for the major institutions that determine the rules of economic globalisation.

In both economic and political terms, ‘sharing’ can be a direct path to the fulfilment of basic human needs and rights, and is naturally aligned with the concepts of social and economic justice. As long recognised by progressive campaigners, social justice cannot be achieved by market mechanisms or charitable giving and requires the implementation of redistributive government policies, effective laws and regulations. Relating the principle of sharing with economic policy in this way is important for debates around income and wealth inequality, in which it points to the need for distributive justice and long-term structural solutions that cut to the heart of how we organise societies.

However, economic sharing is not an ideological construct or ‘ism’ that is accompanied by a specific set of policies or procedures. The principle of sharing is ubiquitous in society and precedes the doctrines of capitalism and socialism by millennia, hence it is not beholdden to any current or historical political philosophy. This is not to say that existing political concepts and economic policies do not reflect or even embody the principle of sharing, as they do in many cases. Applying this simple principle to the field of political economy can also help to navigate between the divisive ‘isms’ that still drive much of the debate on how States can guarantee social and economic rights for all people.

Humanity urgently needs to move beyond the restrictive ideologies of the past and embrace solutions that meet the common needs of people in all nations, both now and for future generations - which will be impossible to achieve without some degree of economic sharing. In an increasingly unequal and unsustainable world in which all governments need to drastically re-order their priorities, a call for economic sharing embodies the need for justice, human rights and sound environmental stewardship to guide policymaking at all levels of society.

Article: Revisiting economic man
Recent empirical studies suggest that people, far from being self-interested ‘rational maximizers’, have an innate tendency to share and cooperate. Could...
Article: Common questions about economic sharing
As the concept of sharing slowly begins to grip the public consciousness, there are many questions that arise about the meaning and relevance of this...
Report: Sharing the world’s resources – an introduction
A sustainable global economy fit for the 21st Century must be based on a new ethical framework that reflects and supports humanity’s interdependence. The...
Article: Overcoming free market apathy
Despite the oft-repeated claim that ‘there is no alternative', today’s market society is neither natural nor inevitable. Acknowledging and exploring other...
Article: A new economic paradigm: sharing the world’s resources
Share The World's Resources was interviewed on VoiceAmerica talk radio about the reasons for founding the organisation, what economic sharing means, and...
Article: Values and the sharing economy
In order to stimulate further public engagement and activism on global issues, it is important for those promoting the sharing economy to place far...
Blog: Cultivating intrinsic values through sharing
According to a growing body of psychological research, promoting intrinsic values can lead to better outcomes for the environment and society as a whole....
Printer-friendly version