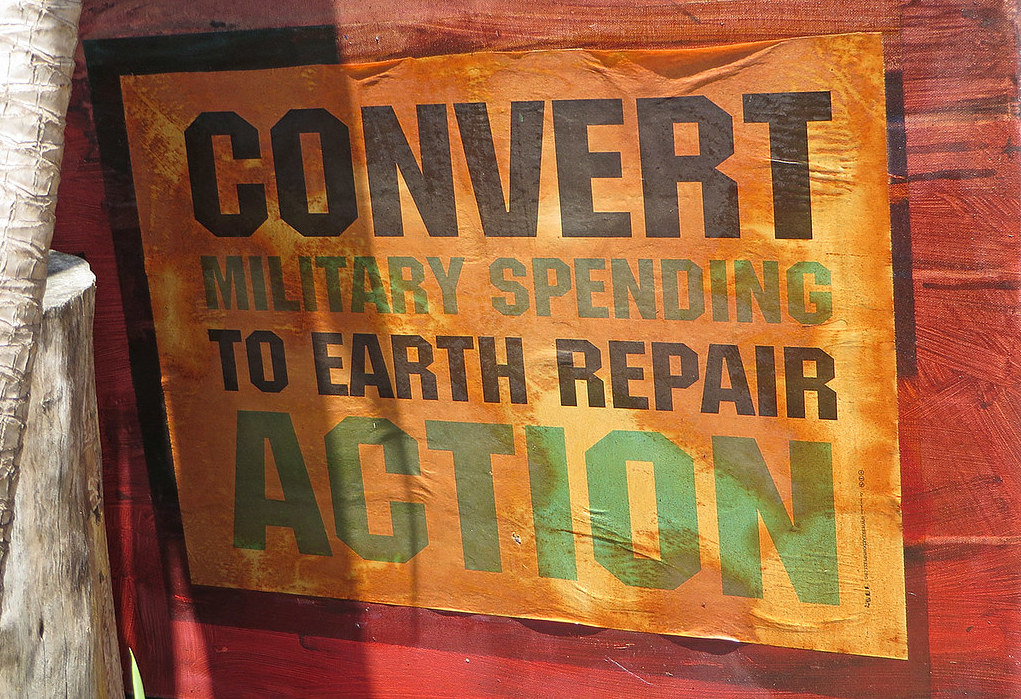 Imagine what could be achieved if just a portion of the money spent on military expenditures were pooled into a global fund, and redirected towards ending hunger and massively investing in public health systems.

If nations held a referendum, asking the public if they want their taxes to go to military weapons that are more efficient in killing than the ones we currently have, or if they would prefer the money to be invested in medical care, social services, education and other critical public needs, what would the response be?

Probably the majority of people would not have to think long and hard, since for many life has become an endless struggle. Even in wealthy countries, the most basic social rights can no longer be taken for granted. Social services are increasingly being turned into commodities, and instead of helping ordinary people they must serve shareholders by providing a healthy profit margin.

The United States is a prime example, where seeing a dentist or any medical doctor is only possible if one has health insurance. Around 46 million Americans cannot afford to pay for quality healthcare—and that is in the richest country of the world.

In less developed nations, a large proportion of people find it hard to access even the most basic resources to ensure a healthy and dignified life. One in nine of the world’s population go hungry. And the Covid-19 pandemic has only exacerbated this crisis of poverty amid plenty, with the number of people facing acute hunger more than doubling.

But the United Nations’ funding appeals are far from being met, condemning thousands to unnecessary deaths from hunger this year. With aid funding falling as humanitarian needs rise, aid agencies are being forced to cut back on life-saving services.

Does it make any sense for our governments to spend billions on defence while fragile health systems are being overwhelmed, and the world is facing its worst humanitarian crisis in generations?

Global military spending continued to reach record levels in 2020, rising almost 4 percent in real terms to US$1.83 trillion, even despite the severe economic contractions caused by the pandemic. The United States spends two-fifths of the world’s total, more than the next ten countries combined, and still cannot afford to prevent 50 million of its own citizens suffering from food insecurity. Most shamefully, the United Kingdom is massively boosting its arms budget—the largest rise in almost 70 years, including a vast increase to its nuclear weapons stockpile—while cutting aid to the world’s poorest by 30 percent.

Consider what a fraction of military budgets could achieve if that public money was diverted to real human needs, instead of sustaining the corrupt and profitable industry of war:

These opportunity costs highlight our outrageously misplaced priorities during an unprecedented global health emergency. The coronavirus pandemic has exposed just how ill-prepared we are to deal with real threats to our societies, and how our ‘national security’ involves a lot more than armies, tanks and bombs. This crisis cannot be addressed by weapons of mass destruction or personnel prepared for war, but only through properly funded healthcare and other public services that protect our collective human security.

It’s time to reallocate bloated defence budgets to basic economic and social needs, as long enshrined in the Universal Declaration of Human rights. Article 25 points the way forward, underscoring the necessity of guaranteeing adequate food, shelter, healthcare and social security for all.

There is an imperative need for global cooperation to support all nations in recovering and rebuilding from the pandemic. The United Nations and its frontline agencies are critically placed to avert a growing ‘hunger pandemic’, and yet are struggling to receive even minimal funding from governments.

Imagine what could be achieved if just a portion of the money spent on military expenditures were pooled into a global fund, and redirected towards ending hunger and massively investing in public health systems, especially in the most impoverished and war-torn regions.

The common sense of funding ‘peace and development, not arms!’ has long been proclaimed by campaigners, church groups and engaged citizens the world over. But it will never happen unless countless people in every country unify around such an obvious cause, and together press our public representatives to prioritise human life over pointless wars.

In the words of arms trade campaigner Andrew Feinstein:

What you can do

Sonja Scherndl is the campaigns coordinator at Share The World's Resources (STWR), a civil society organisation based in London, UK, with consultative status at the Economic and Social Council of the United Nations. Adam Parsons is STWR’s editor.

Page: Petition: Divert military spending to global covid relief!
News: Acute hunger set to soar in over 20 countries, warn FAO and WFP
Acute hunger is set to soar in over 20 countries in the coming months without urgent and scaled-up assistance, warn the UN's Food and Agriculture...
Blog: How can we turn military spending into a budget for the people?
While President Trump’s 2018 budget proposes giving more than $700 billion to the military, it will come at the expense of trillions of dollars in cuts to...
Article: The world's common humanity and US foreign policy
'A sensible and effective foreign policy recognizes that our safety and welfare is bound up with the safety and welfare of others around the world.' By...
Report: Financing the global sharing economy, part three (3): divert military spending
This section of the report Financing the Global Sharing Economy demonstrates how governments could redirect the colossal financial resources currently...
Blog: 3% of U.S. military spending could end starvation on earth
A billboards project from World Beyond War highlights how little of current U.S. military spending could permanently end hunger and extreme poverty...
Page: Petition: Divert military spending to global covid relief!
Printer-friendly version